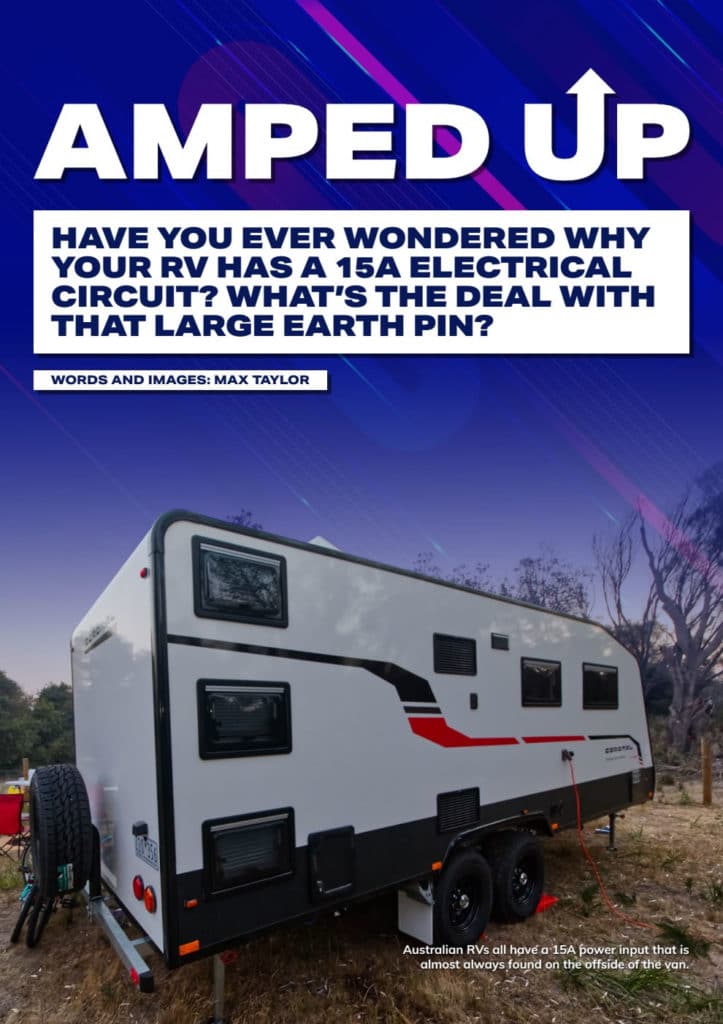 Have you ever wondered why your RV has a 15a electrical circuit? What’s the deal with that large earth pin?

You’re new to caravanning and you’ve packed the car and the van and hit the road. At the powered site, you unpack the extension lead, ready to plug the van in and get the fridge running on 240V power.

But… what’s going on here? The earth pin on the van’s power inlet is too big. It won’t fit the standard plug on the extension lead you packed from home.

Does this sound familiar? As you no doubt know, RVs in Australia are built as standard with a 15A 240V electrical circuit. The question is why. After all, every appliance in a caravan is comparable to the appliances in any household, which are plugged into 10A power points.

Unlike a house, most Australian RVs have a single 240V electrical circuit. You may have noticed that your van has just one 16A residual current device (RCD). Therefore, in order to run more than a few appliances at once – depending on their current draw – a 15A circuit is necessary.

Every electrical appliance draws current, measured in amperage, from about 5A for a typical microwave to 9A for a typical toaster.Think of it this way: a van’s air-conditioner might draw 7A, which leaves 8A for other appliances.

At any one time, the electrical circuit of a caravan might be running a battery charger, a fridge, charging a computer, and perhaps running an air-conditioner.

If all of that current was running through a single 10A circuit, it’s a fair bet the RCD would constantly trip to prevent an overload and potential fire.

Ultimately, a 15A circuit gives a caravanner more scope to safely run the many appliances found in a typical RV.

When the 15A ‘standard’ was determined, caravans weren’t as extensively fitted-out with electrical appliances as they are today. You could argue that a 20A circuit would nowadays be more appropriate.

However, that’s unlikely to change, given the ‘infrastructure’ that supports the RV lifestyle runs off 15A – caravan parks are a case in point.

It is theoretically possible, Caravan Electrical Solutions’ Jason Arter says, to fit more than one 15A circuit to an RV to allow the use of many high-current-draw appliances at once. However, that would require the vanner to run multiple leads and probably pay for multiple powered sites.

A simpler solution would be to run your van’s fridge off gas as needed and investigate 12V alternatives, such as a 12V compressor fridge and coffee machine. And why not boil your kettle instead of plugging it in? You could also run a 240V inverter, if your 12V system is up to the task.

It is possible to plug a caravan into a domestic 10A supply. However, rigging up your own extension lead, by chopping off the 10A plug and replacing it with a 15A plug so that it fits the van is a recipe for disaster. And illegal.

The safe and legal way to plug a van into a 10A power source is to use an Ampfibian power adaptor, a device that contains an RCD to prevent an electrical overload. When plugged in, the Ampfibian will provide 10A to the RV. If current exceeds 10A/2400W, the unit will cut the current off.

There are three variations, from the Mini – which is suitable for use in undercover areas, such as in a carport – to the weatherproof RV Plus and Max.

I used the RV Plus during a recent trip when I had to plug a van into a 10A power source and was very happy with it. The peace of mind that came with knowing my equipment, and family, were protected was worth every penny.